MessagePop is a small, Windows program that can be used to display a message, set via command line arguments, in an always-on-top popup window. For Windows Vista and up. 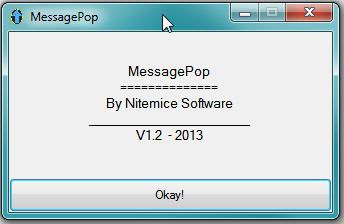 If you want to read the backstory that lead me to create MessagePop, I wrote a blog post about it a while back.

So the basics of how to use MessagePop are:

MessagePop can be used in various ways. It can be run on a schedule like an alarm, from command line as a warning or alert prompt, or from a shortcut for some reason. If you've got an idea for how to use MessagePop, go ahead! And tell me, because I'd love to know!

MessagePop is provided under a MIT Licence, which can be found in the readme. 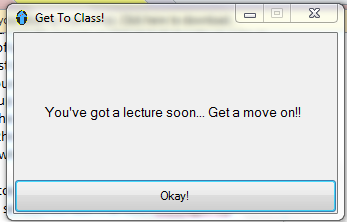 How to use MessagePop as a scheduled notification